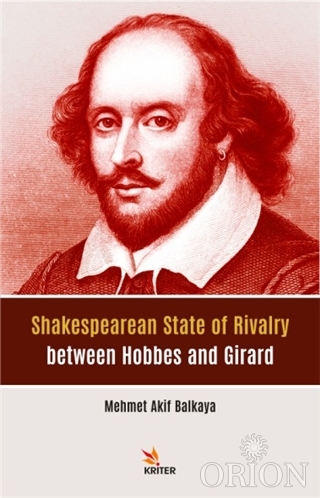 Shakespearean State of Rivalry between Hobbes and Girard

The aim of this book is to study William Shakespeare's Titus Andronicus (1594), Macbeth (1606), and King Lear (1608), as examples of the state of rivalry which, as the study asserts, is related to Thomas Hobbes' theory of the state of nature, and René Girard's theory of mimetic desire. To this end, the state of nature, mimetic desire, and the state of rivalry are studied with their origins, definitions, types, and characteristics. The state of nature refers to the state of man who is egotistic, and self-preserving. A man in this state believes in equality by birth. In this state, man is at war against one another, as there is no (or lack of) authority to keep everyone secure. However, there may be human beings who are in that state even in a civil society under the dominion of an authority. They may secretly put manipulative plans into action for personal gains. Such an authority constructs order by the help of civil laws to prevent any disobedience and civil strife. In time of disobedience, this condition may spread around like a contagious disease. Among the reasons that lead to such a conflict, for Hobbes, are competition, diffidence, and glory. These notions have parallels with mimetic desire. Mimetic desire refers to man's mediated desire toward an object. Imitating a mediator brings forth rivalry since the desired object ascertains competition. Therefore, mimetic desire has a triangular structure: mediator as the model, the desirer, and the desired object. The study concludes that the characteristics of, and the relationship between the state of nature, and mimetic desire are conducive to the state of rivalry in Shakespeare's Titus Andronicus, Macbeth, and King Lear.