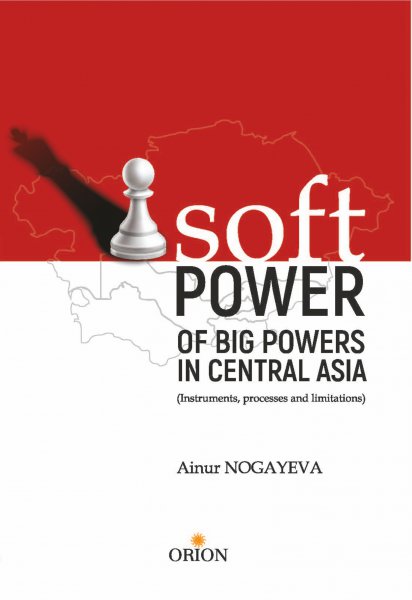 A plethora of works have been devoted to the geopolitics of the region, including foreign states military and economic influence rivalries, reviving at least rhetorically Sir Halford MacKinder's theories about who controls the heart of Central Asia controls the world. Few books however have been devoted to the multiple dimensions of soft power and how Russia, China and the United States have implemented it in Central Asia. This work is therefore welcome by its clear presentation on the concept of power and its implementation in Central Asia. It is also endowed with a didactic quality, an indicative bibliography for each of the studied topic, and questions for further discussion in the end of each chapter. This book is therefore useful for an audience interested in digging into the concept of soft power and into this understudied dimension of geopolitical games in Central Asia.

Assoc. Dr. Ainur NOGAYEVA's book examines the little studied soft power issue in Central Asia with an emphasis on the main players in the region: the West, represented by the USA and the European Union, Russia and China.

The book examines the aims and interests of the major global / regional powers in Central Asia primarily from the perspective of a researcher from within the region. It contains a comprehensive analysis with this aspect. It has the characteristics of an extremely original work. The use of different sources and data in many languages has also helped the study to demonstrate a richer, up-to-date and objective attitude.

The concept of soft power is not new. Nowadays, it is widely discussed scientifically. However, this study provides readers with comprehensive research from theoretical discussions to current practices in the region and future strategic predictions.

This study is an important resource, both qualitatively and quantitatively, with the purposes of understanding and perceiving not only the Central Asian geopolitics, but also the geopolitical and geostrategic approaches and orientations of the Big Powers at the global and regional level.

Faculty of Humanities and Social Sciences,

Head of Department of Political Science and Public Administration

I. POWER IN INTERNATIONAL RELATIONs

2. Roles of Big Powers in the System

Capacity of Big States in the system

China In The System: Second Big

Leadership  Of Big Power In The System

1. Discussions about the concept “soft power”

Rankings as Tools of Soft Power

Values/Ethics as a Source of Soft Power

The Impact of the US on values/ethics

The Impact of the China on values/ethics

Culture as a Source of Soft power

Academic exchanges as part of culture

2.Russia as the Leader of Soft Power in the Region

3.USA as Initiator And Leader Of Soft Power

of  Its Global Strategy

OBOR as a tool of Chinese soft power

Answers to Test Yourself